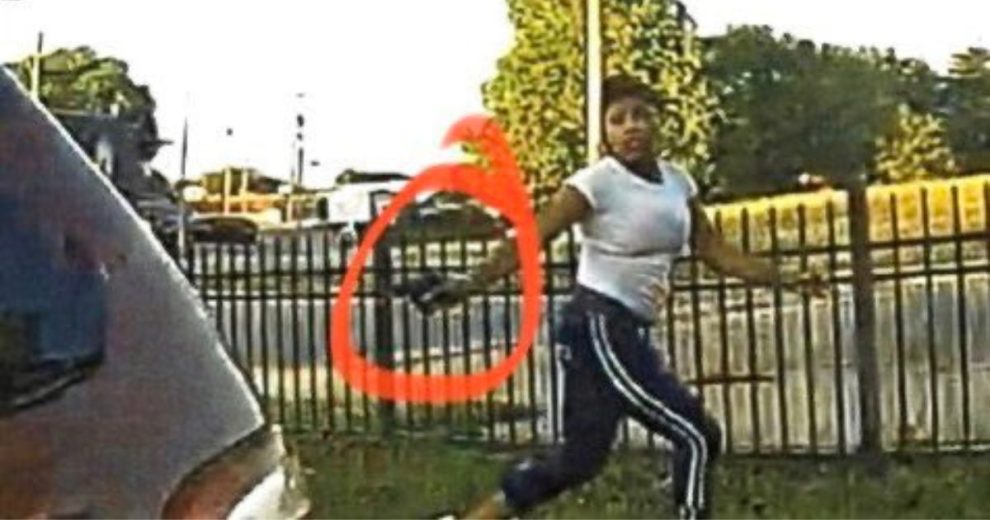 When a black woman was shot Sunday by police officers in Kansas City, Missouri, leftists immediately jumped at the opportunity to use the incident for political gain.

However, it now appears the facts of the case contradict the left’s narrative.

On Sunday, an outlet called The Kansas City Defender, which describes itself as “fearless, radical Black media,” posted an article with the headline, “KCPD Shot An Unarmed Black Woman 5 Times. The Woman Had Her Hands Up.”

The outlet reported 26-year-old Leonna Hale was shot after police apprehended her and another man in connection with a suspected stolen vehicle.

Shédanja said she witnessed police stopping Hale and telling her to get out of the car she was in. She said Hale did so with her hands up, and the officers asked her to get on the ground.

Hale refused to comply because she said she was pregnant, according to the witness. She eventually backed away and then turned to run, at which point police shot her five times, Shédanja said.

“She did not pull out a weapon on them,” Shédanja said. “She did not even have a stick in her hand.”

If this account were true, it would certainly seem to be a gross misuse of force by the Kansas City Police Department. But by all available evidence, the witness was categorically incorrect about key details.

According to KMBC, footage from body cameras showed Hale holding a firearm and pointing it at the officers, who told her to drop it before shooting her three times.

Hale was transported to a local hospital, where she was listed in stable condition as of Wednesday.

“Some false narratives about what happened last Friday night at 6th and Prospect Avenue, unfortunately, were relied upon by some media and other sources,” Jackson County Prosecutor Jean Peters Baker said in a statement according to KMBC. “Our job, as prosecutors, is to remain neutral and review all evidence. Our review of body cam videos provided the actual accounting of events that night.”

Baker said that, contrary to Shédanja’s testimony, Hale was clearly wielding a weapon during the encounter.

“Our review of the investigation revealed the defendant, although she denied having a weapon at the time of the encounter with law enforcement officers, continually displayed a weapon during her encounter with police officers and also appeared to be attempting to flee,” Baker said.

“The two officers stated that she was armed with what they believed to be a handgun. Body camera footage confirms the officers’ statements that Hale was holding a handgun. Still photos, taken from body cam footage, of this encounter also demonstrate a weapon was present and in the hands of the defendant.”

KMBC shared the same image on its website, and the outlet reported Hale was charged with unlawful possession of a firearm as a result of the incident. Hale is also facing charges of unlawful use of a weapon and resisting lawful detention.

Unsurprisingly, many leftists did not wait for the facts of the case to come out before making a judgement on it. Women’s March co-founder Linda Sarsour and The Frontline communications director Leslie Mac were among the verified Twitter users who spread the apparent lie that Hale was unarmed.

Cops can apprehend white mass murderers without a scratch but will shoot unarmed Black people that pose no threat to them.

#LeonnaHale is a 26 year old unarmed pregnant Black Woman who was shot five time by Kansas City police on Friday. She had her hands up and told police she could not follow their directions to get on her stomach b/c she was pregnant. There is no reforming this. #AbolitionNow pic.twitter.com/07xyzD8gck

Moreover, the Kansas City Defender had not amended its headline calling Hale “unarmed,” though it did add a disclaimer to the top of its article debunking its own headline.

“The Jackson County Prosecutors Office said that Leonna Hale had a firearm,” the disclaimer said. “Hale was charged on June 1st. The Prosecutor’s Office released a still image which contradicts The Kansas City Star’s eyewitness testimony.”

Leftists are so concerned with forwarding their preferred narratives that they cannot even be bothered to investigate the facts of a case by spewing off inaccuracies about it.

This sort of rhetoric is both dishonest and dangerous, and only furthers the deepening political divide by fueling activists with information that is untrue.