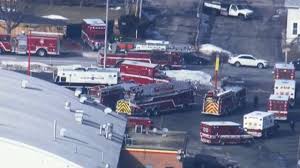 A gunman armed with a pistol opened fire on co-workers at a manufacturing plant Friday in the southwest Chicago suburb of Aurora, Illinois, before being apprehended by police, according to media reports.

Four Aurora police officers and multiple civilians were wounded in the shooting. CNN reports that the officers were all in “stable condition.”

Police as saying there are “multiple” casualties, but have not reported if that includes any fatalities.

He said one of the victims “came running down and was bleeding pretty bad.”

NBC5 Chicago quoted police as saying the gunman was apprehended.

See also  China Launches Military Exercises In South China Sea As Biden Visits Asia
→ What are your thoughts? ←
Scroll down to leave a comment: