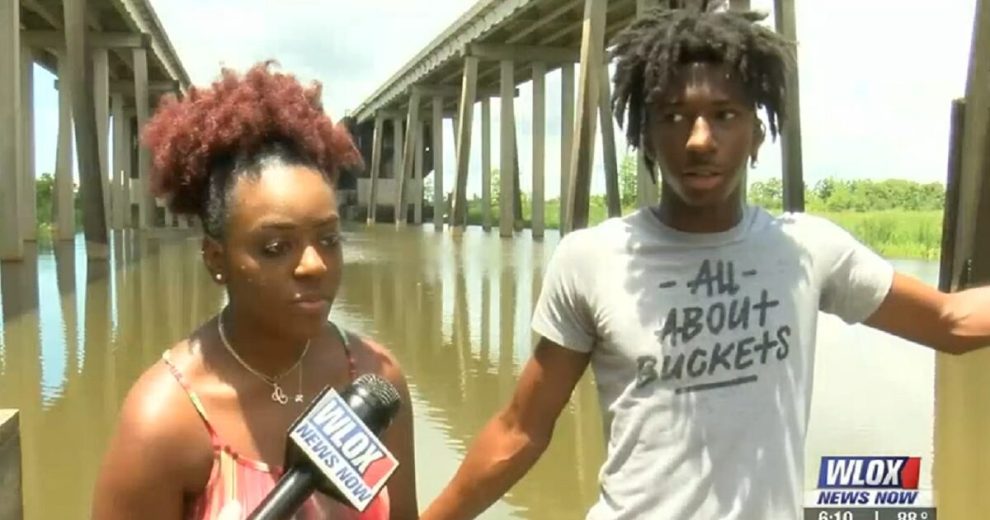 After the carnage this week of a mass shooting, a thwarted planned shooting, and an elderly Bodega owner being criminalized for fighting for his life, this uplifting story is a definite palate cleanser.

Corion Evans, 16, jumped into the river around 2:30 a.m. Sunday after he saw a car drive off the I-10 boat launch. The driver of the vehicle said she was following her GPS and did not realize she was headed for the water’s edge, according to a Moss Point Police Department news release Wednesday.

WLOX-TV, the Mississippi ABC affiliate, interviewed Evans after the rescue:

“I was just like, ‘I can’t let none of these folks die. They need to get out the water,’” Evans, a Pascagoula High School student, told Biloxi, Mississippi, ABC affiliate WLOX. “So, I just started getting them. I wasn’t even thinking about nothing else.”

Evans and one of his friends, Karon ″KJ″ Bradley, jumped in and helped get the teenagers inside the vehicle onto the roof.

“I was behind them trying to keep them above water and swim with them at the same time,” Evans told the station.

At 80 miles long, and 8,800 square miles, the Pascagoula River is the largest undammed river in the contiguous 48 states. Considered an “ecological jewel,” it is currently being threatened by developers building tributary dams to supposedly combat climate change. They never stop, but that is a story for another day.

When Moss Point Police Officer Gary Mercer arrived on scene, he saw Evans already in the water executing the rescue. Mercer jumped into the river to assist with one of the teenagers. The girl unfortunately panicked and pulled Officer Mercer under the waters.

“I turned around. I see the police officer. He’s drowning. He’s going underwater, drowning, saying, ‘Help!’” Evans told WLOX. “So, I went over there. I went and I grabbed the police officer and I’m like swimming him back until I feel myself I can walk.”

Evans came to Officer Mercer’s, then the girl’s aid and helped them both reach the shore.

“If Mr. Evans had not assisted, the situation could have turned out differently, instead of all occupants being rescued safely,” said Moss Point Chief of Police Brandon Ashley.

Corion Evans’ heroism has not gone unrecognized by the community. On Tuesday, Moss Point city officials presented him with a certificate of commendation, recognizing his bravery and heroism in rescuing four people from sure death in the waters.

And this young man has a proud mother, who was not only relieved that her son survived, but that he stepped up when lives were at stake.

“I’m glad nothing happened to him while he was trying to save other people’s lives,” Marquita Evans told WLOX. “I was really proud of Corion because he wasn’t just thinking about himself. He was trying to really get all those people out the water.”

According to the news station, Evans has been swimming since he was three years old, and felt no hesitation about making the jump into the river.

“Twenty-five yards out, so it was a lot of swimming. My legs were so tired after,” he told the station. “Anything could’ve been in that water, though. But I wasn’t thinking about it.”

One of my readers and I were discussing the Highland Park tragedy, and he made this observation:

I would never defend any of these shooters, but it’s sad that in this great country of opportunity that young men can become so terribly twisted. I know the answer is complicated and complex, but I hope we find it.

I responded to him that it really isn’t complicated or complex. Society, the Left, the powers that are seeking to destroy our young men and women, wish to make it that way. I outlined three potential solutions that I believe could make a difference in the outcome of our young men, and I feel like Corion Evans’ heroism bears this out.

STOP THE DRUGS. Especially during the formative years: The Ritalin, the anti-depressants, the mood-altering drugs to control supposed “behavioral” issues. The huge majority of those diagnosed with such issues have been boys. And we wonder how a Bobby Crimo happened.

MORAL GROUNDING. Jumping into a river to save others at the expense of yourself requires a moral center. That just doesn’t come by happenstance. Marquita Evans obviously instilled in her boy to look out and care for others, and it served him well in the clutch.

PHYSICAL FITNESS. It is obvious that Corion Evans does not only sit around on his couch playing video games. It is because of his physical fitness that he was able to think clearly, execute a plan, and save four lives.

It is obvious that Corion Evans embodies all three. A police officer and three teenage girls are alive to see another day because of this.