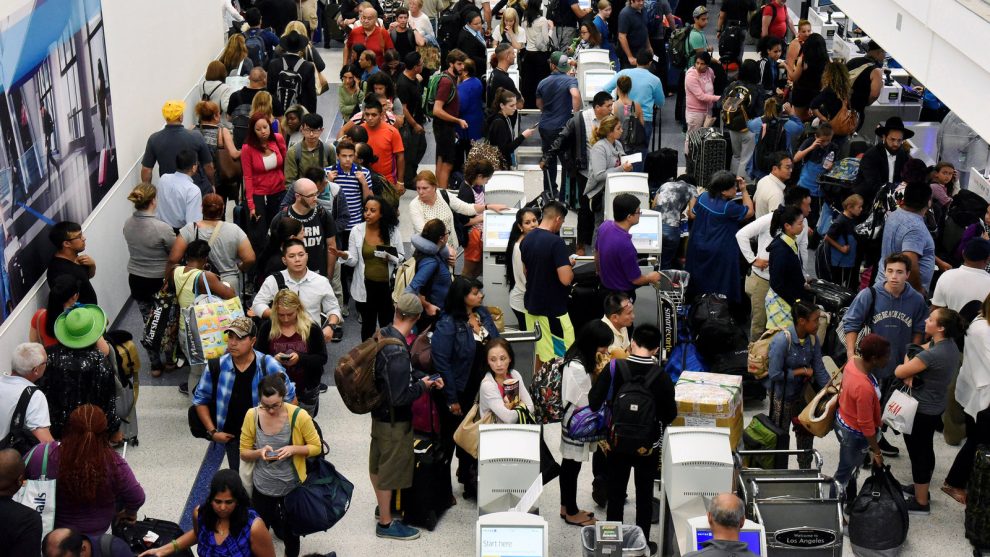 Flight delays and cancellations continue to plague the travel industry as over 6,700 flights within, into, or out of the United States were delayed Friday.

The delays were accompanied by 714 cancellations in the U.S. and 2,970 cancellations worldwide. Moreover, 17,314 total flights worldwide were delayed Friday, flight-tracking site FlightAware reported. In terms of airlines, Southwest saw the most delays with 1,348, followed by Delta’s 629. Of JetBlue flights, 599 flights took off later than scheduled, totaling 55 percent of its scheduled trips. Spirit Airlines saw delays on 378, or 46 percent, of its flights, while 539 of United’s flights were delayed.

Customers took to Twitter to voice their displeasure over delays and cancellations.

One outraged woman, who goes by the Twitter handle @BagladyKiim, alleged that JetBlue had “inexplicably cancelled” three of the return flights she was scheduled to take home from her last four trips:

@JetBlue nice job cancelling our flight 10 hours before take off with no explanation. We have no hotel, need to return car rental and missing obligations at home. Fourth flight in a row by you where the return flight was changed and third where it was inexplicably cancelled.
Hank Lockwood, a producer for Barstool Sports, said he has been hearing “horror stories” of canceled flights.

Not a conspiracy guy but something is going on with airlines. It seems like 80000 flights have been cancelled the last 7 days. Stoolies were coming up left and right in NOLA with horror stories about getting down there and I’ve seen a bunch more issues this week 🧐🧐🧐🧐

The delays came after more than 3,500 flights were canceled and 8,800 were delayed last weekend, as Breitbart News reported:

The airlines cited different reasons for the mass cancellations and delays. JetBlue cited “severe weather in the Southeast and multiple air traffic control delay programs,” as a reason for the delays. Southwest Airlines blamed “weather and airspace congestion” and a “technology issue” for their cancelations and delays.

CNN noted that staffing issues and weather had each played a role in the airline chaos.

A brewing storm threatens to make matters worse next week as AccuWeather meteorologists “say it could result in a five-day stretch of threatening severe weather as well as a robust snowstorm that could produce dangerous blizzard conditions,” the outlet reported.

According to AccuWeather Meteorologist Brandon Buckingham, “Numerous disruptions to travel and shipping efforts are likely, with the potential for power outages as a result of rain, thunderstorms, wind and snow from the unfolding and strengthening storm next week over the middle of the nation.”

The storm threatens to bring feet of snow to central Colorado, Wyoming, Western Nebraska, Southeastern Montana, parts of Minnesota, and the Dakotas, according to Accuweather. Intense thunderstorms are shaping up to hit areas from the Gulf Coast up through the Great Lakes between Tuesday and Thursday, while the West Coast is expected to experience milder effects from the weather system, with rain possibly making landfall in northern California and Oregon on Sunday night. The forecast shows rain and showers in the Northeast.