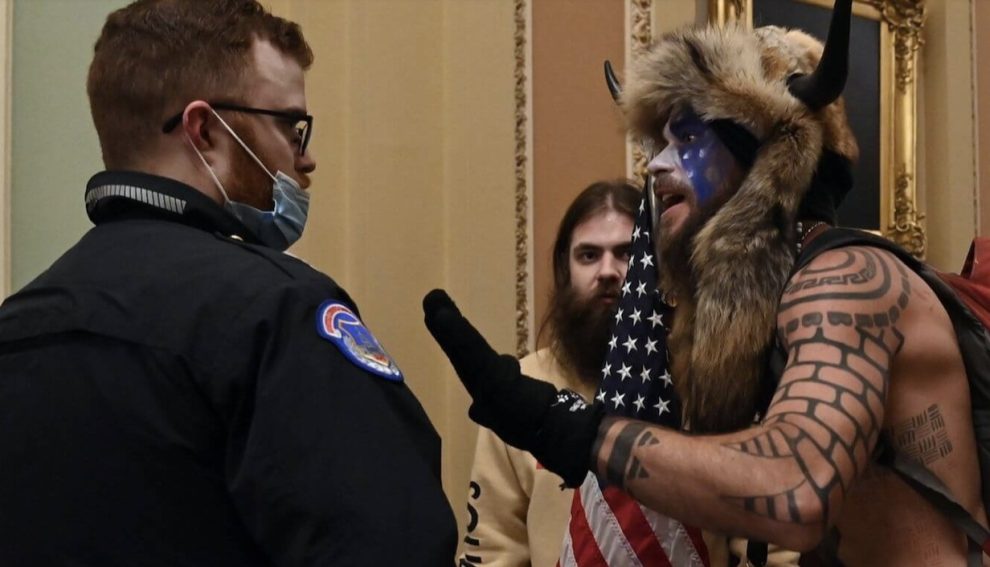 Thirty-four US political prisoners of the Biden regime penned a very sad letter this week requesting a transfer to Guantanamo Bay, Cuba facility where they would receive meals, sunlight, freedom of religion, exercise, entertainment, and be treated like human beings.

These thirty-four January 6 political prisoners have been held for over a year and a half without trial for misdemeanors and trumped-up felony charges.

This group of men have been isolated, beaten viciously, abused, threatened, tormented, and belittled by the guards based on their political and religious beliefs.

The men and women have been without medical assistance, medications, exercise, and most of these men have been held in isolation with little human contact for months at a time.

This is America’s future if the good people of the country do not stand up and demand an end to this injustice.

These men and women know that if they were to be moved to Gitmo they would not have flooded toilets, mold, flies, and frequent beatings.

Here is the original handwritten letter to the Garland Department of Justice.

When one considers a society that distinguishes itself upon the standards of a “First World Country” allocation among the other numerous Nations around the globe, while informing its citizens that they belong to a country that ensures “Liberty and Justice for All”, it’s difficult to imagine then, that The United States of America, supposedly the wealthiest Nation on the planet, would subjugate its own citizens to that of incarceration and injustice instead, all while administering medieval standards of living to the agonizing occupants of its “Correctional Facilities”.

A more accurate terminology to describe the facility and the staff that this letter has escaped the clutches of that you now read, would be to call this location an “Evisceration Facility”, of the body, mind and soul, operating as an abomination to The Law and to its Nation’s Government, which ironically lies only a handful of blocks away.

For nothing is being corrected within the forsaken concrete walls of The District of Columbia Jail. Its woeful captives are all but slowly murdered in every way except for their very soul being ripped from their famished chests on behalf of this mercilessly sinister institution.

As prisoners of this Jail, we have witnessed the horrendous treatment and have been personally afflicted by the hellacious conditions this Jail insists on tormenting its traumatized guests with.

Though words will always fall short of an accurate depiction of the magnitude of pandemonium that every prisoner within these walls has had no choice but to endure, what follows is a collection of repeated offenses this Correctional Facility habitually submits upon its captives. For if this pale dungeon of Human Rights Violations dared to summon any honesty of hard choice pertaining to the abhorrent atrocities that take place behind these unforgiving doors, they should erect a sign above the front gate that says, “Abandon All Hope, Yee Who Enter Here”.

The destitute and desperate prisoners of 1901 D St. SE, Washington D.C. 20003 have and will continue to endure a combination of any and all of the following:

Begging for Help / Water / Medical Aid / Mercy through a 4 inch by 10 inch window of cold metal doors
No Visitations
No Religious Services
No Attorney Access
Mail delayed 3-4 months prior to delivery
Laundry returning with brown stains, pubic hair, and or reeking of ripe urine
Worms found in salad of “Meals”
Inadequate calorie count of “Meals”
Complete lack of nourishment in “Meals”
Loss of Head Hair due to malnourishment of “Meals”
Loss of Eye Sight due to malnourishment of “Meals”
Suffering from Scurvy due to malnourishment of “Meals”
Blatant extortion via commissary in order to maintain health and or body weight
Rust in the Water
Rust in jagged metal desks in Cells
Rust on metal cages near face on small windows of Cells
Black Mold on walls of Cells
Black Mold on floors of Cells
Black Mold in vents of Cells
Broken Sinks in Cells
Broken toilets that either wont flush or repeatedly explode in Cells
Cockroaches in Cell / Cell Block
Mice in Cell / Cell Block
Black Mold on floors and walls of showers in Cell Block
Black Sewer Flies in the Shower
Denial of basic cleaning equipment to sanitize Living Space
Denial of personal grooming allowed, forced to use Nair on head and face that leaves chemical burns on skin
Stuck in Cells for 9 days without shower
Improper Medical Care
Medical Care arriving months later, or none at all!
Lead Paint inside Cell / Cell Block
No Access to Discovery
No Legal Support such as laptops, printers, copiers
Denial of Legal Mentors
Vaccine Requirements for Visitations
Vaccine Requirements for Visitors
Vaccine Requirements for Haircuts
Vaccine Requirements for Religious Services
Vaccine Requirements for speaking with Lawyers in person
C.R.T. Propaganda on Tablets
Re-Education Propaganda on Tablets
Lack of Legal Documentation on Tablets
Racially Biased information on Tablets
Removal of Internet Access / Booster for Educational Tablets
Solitary Confinement for 25 ½ hours or more at a time
Outdoor Rec denied arbitrarily
Entry to Congressmen & Women who came to check on us Denied
Repeatedly Mocked and or Insulted for our skin color or “Religious” documentation
Compared to “Beasts”, “Dogs” and “Hogs” by “The Final Call” Magazine
Politically mocked by staff with Democrat, Black Lives Matter, Kamala Harris, Joe Biden related attire
Sent to “The Hole” if we express any political views whatsoever
Racially Profiled by Guards
Sleeping on the job by Guards
Denial of hot water by Guards
Prevented from attending court dates by Guards
Homosexual and or Verbal Assaults by Guards
Maced by Guards
Physically Harassed by Guards
Assaulted by Guards
Cell Invasions in the middle of the night by Guards
Grievous Beatings by Guards
Threatened with and or Nearly Stabbed with “12 Inch Knives”
Trials Postponed for at least 6 Months or almost a Year
Bond / Bail continually Denied
Removal of Internet Access of Clear Tablets
Removal of Access to Attorney
Removal of Access to Law Library
Removal of Access to Worship Services
Removal of Access to Grievance Forms on Tablets

It is because of this extensive report of complaints and afflictions upon those held prisoners here in the District of Columbia Jail, that not only compel us to alert the world of the diabolical conditions this “correctional facility” continues to crush all of its detainees with, but also as political prisoners on American soil, who have been unjustly and unfairly incarcerated, relentlessly burdened by selective prosecution, slandered and vilified by mainstream and social media, deliberately accosted with death threats from within the jail and received threats upon our homes and families through the mail, ALL extending from a political nature or affiliation, We hereby request to spend our precious and limited days, should the government continue to insist on holding us captive unconstitutionally as pre-trial detainees, to be transferred and reside at Guantanamo Bay, a detention facility that actually provides nutritional meals, routine sunlight exposure, top notch medical care, is respectful of religious requirements, has centers for exercise/entertainment for its detainees despite the fact that those residents are malicious terrorists, real members of the Taliban, and few are United States Citizens, instead of remaining trapped within the wretched confines of cruel and unusual punishment of the DC Jail.