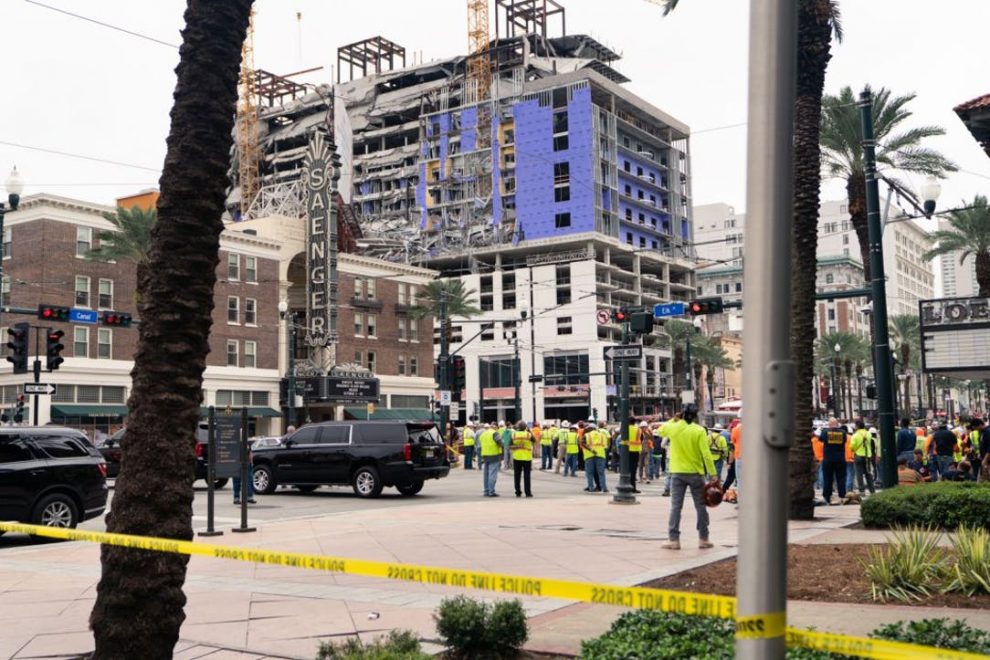 At least one person was killed and several others injured after a Hard Rock Hotel that was under construction partially collapsed in New Orleans, officials said.

EMS Director Emily Nichols said the victims taken to the hospital were “all stable at this time.” It was not clear if the people unaccounted for were trapped or left the scene.

McConnell urged the public to avoid the area and said another collapse was “absolutely” possible because of how unstable the building is.

He called the situation “very dangerous” since the crane, which weighs tons, is not supported.

Biden Blames Attack On Paul Pelosi On Trump’s Election Fraud Claims Hear Me Out—Let’s Scrap the State of the Union Address LeBron James Sets NBA Record for Most Points Scored Biden Touts America’s ‘Possibilities’ In State Of The Union Address Biden Calls for Amnesty for Millions of Illegal Aliens at State of the Union NORAD Pleads Incompetence Over Failure To Spot Trump-Era Chinese Spy Balloons Trump Unleashes After Catching Biden’s Embarrassing SOTU Mistake: ‘Can’t Do That!’ Democrats Ditch the US Flags and Wear “Abortion” Pins Instead to SOTU Address MIDDLE EAST EARTHQUAKE: ‘An Emergency Within an Emergency’ Mom Has Major Regrets About Transing Her Young On Med Student and Researcher Admits ‘We Were Wrong About COVID and It Cost Lives’ VP Harris Funnels Money Into Central American Job Creation In Effort To Slow Illegal Immigration Dan Bongino Provides Major Update from Hospital Bed: ‘Thanks for All of Your Prayers’ Fat Satan Grammys Deliver Ratings Catastrophe of Just 12.4M Viewers Reality Checks In: “Indestructible” Retail Traders Who Made Millions During The Pandemic Are Now Tapped Out
See also  Not So "F**king Awesome"... Bill Maher Blasts "Insane Arrogance" Of Today's 'Woke Revolutionaries'

Dramatic video of the incident showed parts of the building crashing into the street as debris billowed into the air.

Dramatic video shows the moment a crane collapsed at the under-construction Hard Rock Hotel in New Orleans that killed at least one person and injured several others. https://t.co/6rbKpQkV2G pic.twitter.com/2PWJBvpgKY

t was not clear what caused the collapse, which affected the sixth to eighth floors.

Police did not identify the deceased person, who was pronounced dead at the scene.

Calls to the Hard Rock Hotel were not immediately returned. The franchise was planning a 350-room hotel within the city’s Theater District.